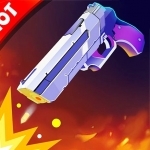 Flip the Gun is the best & realistic Flip the Shoot Gun game! Flip the Gun will take you to the new level of gun game! Shoot wisely with AWP snipers rifles,pistols,mini gun or make fantastic burts with automatic weapons or blow it up with bazooka! Get ready to feel the most powerful guns in your fin Play Flip the Gun online at y10000-games.com. You can play it in fullscreen to have fun with it. Flip the Gun is a great Y10000 game to play with no cost.

Use Left Mouse button to Shoot,